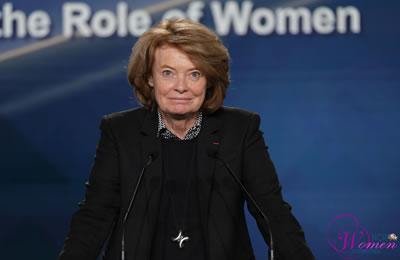 Iranian women must be admired for their courage – Aude de Thuin

Aude de Thuin, Founder and President of Women’s Forum for the Economy and Society – France

Sometimes we think that the situation in the world is getting better. But that is not what I see for women because all over the world, women are the first victims of the repression of wars, the ayatollahs (mullahs) and dictators.

It is also said that the 21st century is the century of women. I do not see things that way.

I see women being victimized in a number of countries of the world, particularly in Iran.

Women who rise up, rebel and do not give up are more and more at risk and they know that.

They know the price of taking the risks but since there is no other way to achieve freedom for themselves and their country, they overcome all obstacles.

They are amazing. Iranian women are amazing. I’m thinking in particular of Sepideh, Sarah, Leyla, Nazdar, Shayla, Touran, Nastaran. They dared to challenge the power. They jeopardized their lives. Yet the Western press does not talk about them. The press is satisfied by just saying that women dare to take off their veil, not to mention their real role and participation in the uprising. As if for the Western press, removing the veil is the only right they claim.

What lack of curiosity on the part of journalists who do not interview them and ask what they want for their country.

Women are an indispensable part of the movement for profound change that affects both their lives and their country. They play a major role at the risk of everything. And we are satisfied to see that they remove their veil.

And their example must serve other women in the world.

Iranian women are brave. We must admire them, encourage them, listen to them and the press must understand the fundamental role they play for a free Iran.

We must not leave them alone in their fight. They must know that we are here to support them, to admire them, to want to help them.

I am one of those women who think that a world without free women who are equal to men is not a good world.

I would also like to end with this: Let’s never forget that we are 50% of the population but also the mothers of the other 50%. As such, we must educate our children, especially our sons, from their childhood to respect women and consider them equal to men.

Let’s make sure that this century is the century for women and for Iranian women.