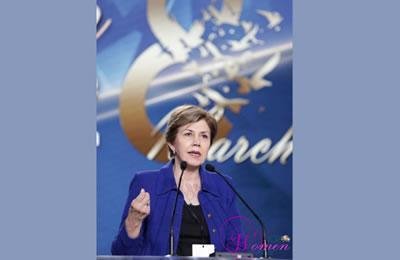 It’s an honor to be here with so many distinguished women, representing so many countries, so many professions, and so many walks of life.

But first and foremost, let me thank Madam Rajavi for convening this meeting and putting this issue on the agenda.

And that was the story line that pretty much went throughout the West but suddenly what started off perhaps as a common protest against the quality of life in people’s homes turned into something else. It turned into a call for a change in the regime of the mullahs in Tehran.

Once this protest began to focus on regime change, we saw that it was not just a local protest, it wasn’t just a few thousand people in one city or another. It began to be an organized protest against the totalitarian regime that has ruled Iran since 1979.

And one of the things that we saw is that people were saying you cannot reform a totalitarian system. You cannot have reformers or moderates in a system which by its very nature controls every aspect of individuals’ life, their home life, their education, their public life. All aspects are controlled.

What we have seen is that the people of Iran said, No, enough! We do not want reform! We want regime change! We want death to Khamenei!

Now, it is one thing to say that we want change and we want to kick the evil doers out. It is one thing to say, OK, we’re going to overturn the system. But there is a problem with that, as we have seen in the failed attempts of many nations around the world, including some in the Arab Spring, who were not able to replace one dictator with freedom, but rather traded one dictator for a new dictator or a new group of those who would deny freedom.

So, there must be something to replace the evil.

And what we have seen from Madam Maryam Rajavi over the years is that she offers that new hope. She offers that new face. She offers a program to give freedom to the people of Iran. And that freedom must not just represent in her person, which is great and which is good, but in the principles she stands for. Because it is not just a person, it is the ideas that must stand.

But one thing we know, that as long as one half of the population is denied fundamental freedoms, there is no freedom for anyone.