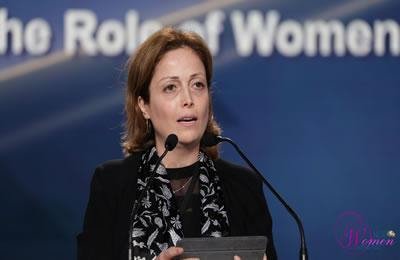 Suheir Al-Atassi, member of the Syrian Opposition Coalition and former Vice Chair of the Council

Over the past seven years, we have had extraordinary opportunities to discover women’s potential, not only Syrians, but those who have lived under conditions of tyranny, repression, war, conflict, revolutions, and freedom springs around the world. Their energies fly higher than peace doves, demanding emancipation, freedom, democracy, toppling tyrannical regimes, fighting war criminals, seeking justice through their persecution, and thus opening the doors to a bright future for peoples and countries.

The pain of Syrian people –caused by the tyranny of Assad’s regime and its supporters with Russia and the Iranian regime at their forefront– has compelled us to expand our duties, to go beyond calling for justice for Syrians or their liberation from death under the bombardments, starvation, arrest and displacement.

Our mission also includes facing the International Community, which has continued to underestimate the Syrian cause to the extent of condensing it into small constitutional reforms and power-sharing problems. Whereas, the main demand is to establish a transitional governing body in which there is no place for Assad and war criminals. This committee has the task of halting the slaughter of Syrians and restoring their trust in humanitarian and democratic values which have been reiterated by several decision makers around the world in speeches but without any intention to implement them so much that they have lost their credibility.

In light of all this, first as Syrian citizens and second as activists, we need to push towards restoring the Syrian revolution’s path and defend our goals to liberate the Syrian people who are ruled by proxy wars before the public eye.

We also radically reject the misleading idea of protection of civilians instead of bringing justice and equity through the prosecution of war criminals, on the top of them the Assad and mullahs’ regimes.

During the years of revolution, we women have gained enough political awareness to not fall for the model the International Community insists on as mere peace makers. Syrian women will continue to walk the path of revolution until the tyrannical regime is toppled and they can breathe in the atmosphere of freedoms.

Not far from what is happening in Syria, whether geographically or in terms of the extent of tyranny, the Iranian people are suffering from religious and political tyranny and lack of freedoms. For decades, the Iranian Resistance and PMOI have been involved in struggle against the mullahs’ regime, at the price of arrests, exile, and executions.

Iranian and Syrian women alike were involved in leading demonstrations, and motivating and supporting protesters as well as in taking up roles in humanitarian work, political leadership, and international diplomacy.

Mrs. Rajavi is a pioneer among Iranian women and a symbol of hope for you and us and the symbol of women’s strength and consistency in position who continued the struggle, sacrifice, and efforts to purge Iran from the mullahs’ regime and to save Syrians from it.

Mrs. Rajavi’s perception of a future free Iran in the 10-point plan intersects with our vision for a future free Syria reflected in the higher negotiations committee we established.

Mrs. Rajavi’s perception also intersects with our efforts calling on the International Community to boycott the terrorist mullahs’ regime and halt any attempt to rehabilitate the chemical Assad regime, as these two regimes usurped power and committed crimes against their peoples.

The title of this conference unfolds the truth of women’s power that is inside us which we have to employ to put an end to the deviation of the Syrian revolution from its objectives and support the continuity of the Iranian uprising.

Our people broke the yoke of tyranny and chose the path of liberation and freedom, and they will not give up.

This conference is our opportunity to coordinate our strength. We have with us, Syrian, Iranian, and women from all over the world to show solidarity and unify efforts in facing the alliances of authoritarian regimes ruling our countries where people are subjected to all kinds of state terrorism exerted by the regime.

The latter has exhausted the International Community by blackmailing it and leaving it only two options: terrorism or maintaining the ruling structure of these regimes which are based only on tyranny, intimidation, and war crimes.

It befits that the Syrian people who broke the yoke of a 50-year-old fear seven years ago and the Iranian people who rebuilt an uprising after the revolution, to deepen the public’s awareness to reject half-way solutions and call for a third option as demanded by our peoples who seek a radical, comprehensive, and democratic change. Our peoples seek the regimes’ overthrow and death to Khamenei and death to Rouhani. This is where you and us are heading. Thank you.