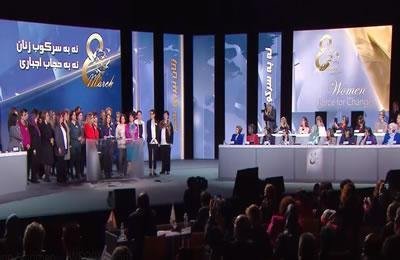 Shirin Nariman, representative of the delegation of Iranian women

Ladies and gentlemen, Madame Rajavi,
I am proud to be here with you today.

In the last few weeks, we have witnessed women’s role in the recent uprising in various cities across Iran.  Although this is not the first time throughout the course of Iran’s history in which women contribute to the struggle against tyranny.

On International Women’s Day in 1979, Iranian women took to the streets and protested against Khomeini’s hideous goals, shouting, “no to compulsory hijab.”

I was a PMOI supporter at the time.  I, alongside many women wearing the hijab, stood for the rights of women who did not want the compulsory veiling.

I recall during autumn of 1980, it was the PMOI’s young generation, who mostly wore hijab themselves, once again took to the streets of Tehran to oppose the compulsory hijab.

I remember how the PMOI treated us young girls, with respect and always reminded us of our rights and our potential to progress. They taught us not only we can help other women, but that we can also stand against the harassment of violent plainclothes agents and Bassij paramilitaries.

We learned something new everyday from working with PMOI women, the most important of which was the realization to believe in ourselves, to have confidence and value ourselves. I was very fortunate that for a brief time I was under the guidance of Mrs. Rajavi.

I will never forget how you, Mrs. Rajavi, used to be our guide and encouraged us to advocate for ourselves and ensure the movement is progressing.  In particular, I remember we went hiking on a few occasions and you were singing alongside us. We then listened to your instructions.

Unfortunately, it was not long before many of those friends were executed, Homeira Eshragh, Simin Hojabr, Ladan Montazersaadat, and many others.  But those were valuable moments which I shall never forget.

And today, you are still continuing to teach and guide us with your leadership.

Thousands of women and young girls were executed in the 1980s, only because they believed in freedom and democracy, for demanding their rights and resisting the oppressors who tried to suppress them.

The beauty of the Iranian women’s struggle lies in the fact that even after 39 years of repression, the same spirit continues to exist till this day.

Today, with women’s prominent presence in protests and uprisings, it is in fact that same spirit we are witnessing which sparked during the 1980s and continues to light the path today. These women courageously chant in public places and in front of police and guards, ‘down with dictatorship’ and call on others to stand up as well, brave women who oppose compulsory veiling. They join bastions of rebellion, write ‘death to dictator’ on walls, and burn the photos of Khamenei. Iranian women will never give up and will continue to fight until they overthrow this regime.

A free Iran is near. Iranians have made up their minds and have decided to make the future theirs. We, exiled Iranians, stand with you in solidarity for a free Iran with a beautiful, tolerant, and equal society. That day is near and these virtues are attainable.

A bright future is awaiting us.

We say no to compulsory rule, religion, and hijab – Sahar Sana’ii