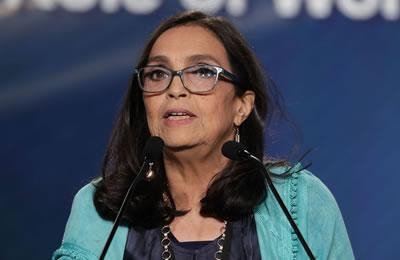 My brothers and sisters, I come from Morocco and from North Africa along with my sisters, the nation’s deputies, Mrs. Khadija Ziani, Ms. Soumia Ouallal, and Mrs. Zohour El Wahabi.

I am honored to be with you on the occasion of the International Women’s Day at a major international conference on the strength of women as a path to change.

I am also honored to be among women who have been involved in the struggle of Iranian women for dozens of years, and I say to the Madame President that the remaining time is very short…

I take this opportunity, from this podium, to praise the continued struggle of the Iranian people against persecution and religious and ethnic extremism which do not miss any chance to bury all attempts of renovation and spare no effort to obliterate the creative capacities of the Iranian people.

We also salute the growing opposition among Iranian women, both inside and outside Iran. From this podium, we call for lifting of hardships imposed on all oppressed women.

I would like to say that each of the women who have converged from all over the world in this distinguished international meeting, brings the voices of hundreds, even thousands of women who have been oppressed by extremism and are victims of violence and tyranny.

I would also like to say that my own experience was not easy and it is to some extent similar to the experiences of some of the women who are here with us, today. We have faced many obstacles and challenges.

I was born in a remote mountain village, far from civilian life. My father was working as a small miner. He went into wells to extract Zink and Lead, and I used to walk for kilometers to go to school so that I could gain my right to education and a dignified life.

I succeeded to obtain the highest degrees and occupy high-ranking positions in the government and this was thanks to the men who supported me.

The Iranian women’s cause is not only of concern to Iranian women, but also to all women because Iranian women, and especially those who are determined and have resisted and persevered, at their forefront the leader Maryam Rajavi, they are struggling against all kinds of extremism and violence.

From this podium, I would like to address the Iranian women who are oppressed by the extremist mullahs’ regime. This regime has turned the country into a large camp for terrorist militias which pose a threat not only to Iran but to the stability and development of the entire region. This is the least that could be done by an extremist regime, especially when it has a religious approach to this radicalism and extremism.

We have learned and we all know that the world history has known periods of radical religious crises which have never lasted forever. We all know that the next step is the collapse of this decrepit regime. This will be realized by the concerted efforts of the opposition inside Iran by their demonstrations and protests, and the efforts of the PMOI-led opposition which have tirelessly continued for 40 years, and I have had the honor of supporting them.

Finally, I would like to praise the great efforts of Mrs. Maryam Rajavi and the Iranian resistance for spreading the word about the Iranian cause and its great role in the field of women’s rights.

I conclude with a message to the mullah who said that equality between women and men is a strange idea. I tell the Vali-e Faqih (Ali Khamenei) who enjoys being called the successor of God on Earth, that the Prophet Mohammad PBUH said that, “Only an honorable man treats women with honor and integrity, and only a vile and dishonorable man humiliates and degrades women.”

I tell the mullah and his followers, “Do not think that women are weak and oppressed. When they rage, their power will break chains and destroy mountains.” I tell the mullah, “Beware of the small tiny branch that you despise. This small branch could make you lose sight and get you killed.”

May peace, mercy and blessings of God be upon you.

We salute the bravery and heroism of Iranian women - Anissa Boumediene