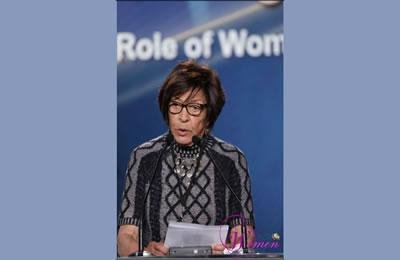 Distinguished audience, first, I would like to thank the organizing committee for granting this opportunity to be part of this great audience.

Best greetings from Egyptian women. Greetings full of challenge against extremism and favoritism against women. Egyptian women participated throughout the history in various revolutions.

Since the 19th century, Egypt has been marked by the emergence of a strong women’s movement. When Houda Shaarawy and her female colleagues founded the Egyptian Feminist Union in Egypt, they called for equal rights for all women in all fields as well as to get rid of the British colonialism.

Shaarawy succeeded in stirring debate about the need for women’s involvement in the fight against occupation and extremism. The National Women’s Movement continued until the 1952 revolution and it was linked to the National Movement. Women continued their struggle in all wars against foreign colonialists.

Since the break-out of the January-25-2011-Revolution, Egyptian women have found themselves side by side men calling for their rights as citizens. Women’s participation came as a solid asset when they strongly supported the revolution, and when some were martyred and others wounded. Egyptian women have fiercely defended the protests and spared no effort to contribute to the success of the revolution. They nursed those shot and wounded, served food and cover, and got involved in Popular Committees to achieve safety for all.

Egyptian women released a statement in which they announced that they will not give up their roles in rebuilding the nation and all institutions. Therefore, the general public in Egypt has witnessed a growing role of women in the political arena since January 2011.

Women’s widely participate in demonstrations and protests. They are no longer a weak being who accepts injustice without reacting and calling for her rights.

In January, Egyptian women from all walks of life, age, economic and social backgrounds took once again to the streets in millions side by side men to protest against the regime of Muslim Brotherhood because religious extremism is known by its hostility towards women.

Iranian women also drew attention and admiration by their effective participation in all scenes, protests, confrontations, measures, and events in Iran. The Iranian uprising in 2009, which lasted for six months, exposed to the world the Iranian people’s ambitions for a free developed and democratic society that is completely different from the visions of the mullahs and their expansionist goals. We note that women have bravely and boldly taken part on the front line of the uprising which is considered as a clear indicator that Iranian women, then, wanted to topple the ruling regime in Iran.

Now, during the recent uprising of Iranian people, women have shown great courage and dare. They stood up with empty hands, dauntless, and enthusiast in the face of security forces while encouraging others not to fear and continue the revolution with them.

They called on everyone to join the ranks of protesters and led the chants. There are witnesses on how women showed great courage and strength in all situations, protests, and demonstrations.

The struggle of Iranian women in the People’s Mojahedin Organization is a struggle against religious extremism, that is against the mullahs’ regime.

Therefore, toppling the terrorist regime in Iran, which rules the country in the name of religion, will be a major breakthrough not only for Iran but also to the peoples of the entire region and to Iranian women and their rights. The efforts and support provided by Iranian women is a human duty and a mandatory step in the struggle against religious extremism.

In Egypt, we have no doubts that with this great organization under the leadership of Mrs. Maryam (Rajavi) we will see a new Iran ruled by democracy in which Iranian women enjoy their full rights. Thank you.