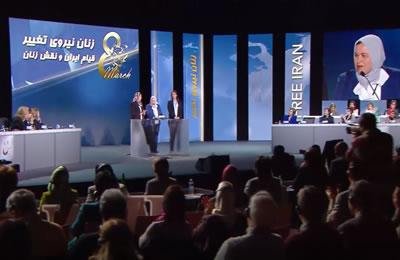 In the name of Allah the Compassionate, the Merciful

Mrs. Maryam Rajavi, on behalf of my sisters from the Palestinian and Jordanian delegations, I greet you. We, in Palestine, have longstanding relation with the People’s Mojahedin Organization. We are proud of these relations of cooperation and struggle and we always communicate and show solidarity in every situation and especially when it comes to women and under the leadership of women.

On behalf of the struggling women of Palestine, we salute your struggle and perseverance, and your fight for justice, democracy, freedom, and human dignity.

In the uprising in Iran, it was clear to everyone that women were up front in the scene. This is an evidence of their longing for freedom, democracy, justice, and human dignity and their desire to gain their own and their people’s rights.

Together, we advance the situation of women wherever they are; in Palestine, Iran, Syria, and everywhere. Together, we help lead women toward broader political, economic and social participation and we offer them all kinds of freedom; freedom of dress, freedom of movement, freedom of thought, and help them enjoy justice, human rights and women’s rights.

In conclusion, I would like to thank you all. We will communicate together until women’s status is improved and real change is brought to people’s life. Thank you all.