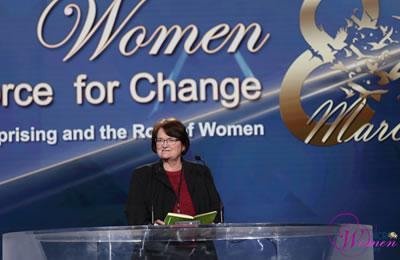 Distinguished guests and colleagues, ladies and gentlemen, and dear sisters,

Thank you for inviting me today.

It is an honor to be here. I’m honored to recognize the role of women in Iran in protest against the theocratic regime.

I’m a member of the Council of the Law Society of England and Wales, and a member of the Human Rights Committee and the Roundtable on Women in the Law. As members of the International Legal Community, we salute the brave women of Iran who are keeping the movement for women’s rights alive in Iran and going much further.

Our sisters in Iran need our support as they challenge the misogynist and repressive policies of the regime. They do so at considerable risk as we have seen. In that peaceful process, they deserve our admiration.

We know they risk arrest, detention, imprisonment and torture and, against all norms of humanity, execution.

We cannot hide from their bravery. We see it on our television and on the internet.

We must do more to persuade our governments that the policies of the Iranian government go against the international conventions on torture and the abuse of human rights cannot be tolerated.

Too long, the officials of the regime, ministers and leaders have enjoyed impunity. They have not been brought to account, and justice has not been done.

A core principle of the rule of law is the independent judges separated from the political regime and government.

It is a matter of grave concern that we note the lack of independence of the Iranian Judiciary.

We are also gravely concerned at the harassment in Albania of the Ashraf and Liberty refugees, long supported by the International Community, but now harassed by agents of the regime.

The International Community must put effective steps in place in order to support real improvements in human rights, the immediate release of political prisoners and protesters.

We will do whatever we can to support you now in this critical period, and in the future, as long as you need us!