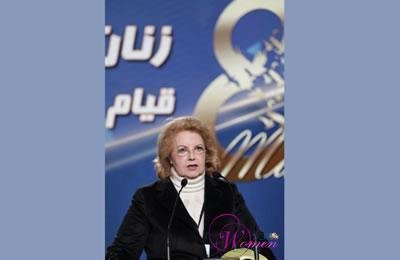 We salute the bravery and heroism of Iranian women – Anissa Boumediene

On this occasion of the International Women’s Day, we wish to acknowledge the courageous uprising of the Iranian people that began on December 28, 2017, and spread with remarkable speed in 142 cities of Iran.

We salute the bravery and spirit of sacrifice of young protesters who stood up for freedom and democracy in Iran.

In these demonstrations, Iranian women were everywhere.

Those who have been suffering from a religious and misogynistic dictatorship for 39 years were present and understood that they had nothing to lose but had everything to gain.

Their courage, their bravery is all the more exemplary as the Islamic Republic of Iran has executed 120,000 political prisoners, 30% of whom were women.

Let us also not forget that before his death, Khomeini, the supreme leader of the revolution, personally ordered the execution of 30,000 political opponents in 1988.

One wonders how Western rulers who supported his arrival, were so impressed by a man who had been expelled from Iraq in September 1978, and who settled in France’s Neauphle-le- Château for five months to lead the Iranian revolution until the departure of the Shah in February 1979.

How was it possible for foreign intellectuals who visited him then, to praise a man whose political program was very clear and who was strongly influenced by the Muslim Brotherhood, and who reserved all the judiciary power for the clergy, charged with applying the Sharia law and introducing important restrictions to all individual liberties. By strictly regulating private, economic and social life, these religious people established their model in the Iranian society.

Moreover, the regime practices the punishment of amputation.

In 2017, dozens of amputation sentences were handed out and upheld by the Iranian Supreme Court. Most recently, on January 22, 2018, the regime, still practicing this punishment, cut off a poor man’s hand for stealing a lamb.

Should we recall that amputation is a crime under international law?

The Algerian Revolution prohibited the amputation from the onset.

The Iranian regime does not hesitate to throw a woman in prison because she no longer wants to wear her veil. The press recently reported a woman who had been jailed for that reason.

I would like to quote in this regard, the words of President Boumediene who declared on April 2, 1974, at the third congress of Algerian women, “The veil is not a criterion of morality for Algerian woman. What can save her is education and moral principles. Let us educate the Algerian girl with moral principles and let her be without veil, whether at the university, the factory or the administration. This is how we conceive freedom and the emancipation of women.”

On this occasion, we would like to recall the heroic marches of Algerian women who stood against the Islamic Salvation Front who wanted to impose an Iranian regime on them, since they had already supplied them with the weapons of Khomeini and his successor, Khamenei. Do not forget, this war left Algeria with 200,000 dead.

Today, we salute the bravery and heroism of Iranian women who fight against backward ideas. The political director of the Revolutionary Guards said on January 27 that 80% of those arrested, including women, were under 30 years of age.

What a failure for the mullahs’ regime because such a confession explicitly reveals that young people born at the time of Khomeini, who have only known this regime of religious dictatorship, have rejected it and expressed this knowing that they risked prison and even their lives.

In the face of this uprising for freedom and popular sovereignty, Western countries must not remain blind and deaf. We must not repeat the dramas of the 20th century; we must not sacrifice hundreds of thousands of victims on the altar of economic interests.

As a brave woman who keeps the struggle against tyranny aflame, know that you have the steady support of your sisters who share your vision.

Let us not forget that woman is the foundation of our society. The poet said, “If the woman watches over the heart, the pillars of this home will be solid. If not, the consequences of this deficiency will be felt throughout the society, because the family constitutes the base of the society.”

Yes, we stand with you Maryam, as we stand with all our Iranian sisters, in your fierce fight seeking to free Iranian women from what enchains and imprisons them.