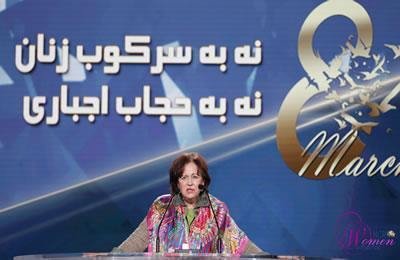 We will be your voice in legal institutions – Maria Candida Almeida

Mrs. Rajavi, my friends, my sisters and brothers,

I am Maria Candida Almeida, one of the deputy prosecutors of Portugal.

Once again, we are here celebrating the International Women’s Day, but I dream of the year when that commemoration is no longer justified and we will celebrate all together the Day of Equality, Peace and Democracy.

I know that men and women, united in their hearts and minds, will achieve a better world!

There will be no more children wandering lonely in the streets, or drowned in turbulent seas, and their small lifeless bodies floating on water and brought to the coasts, their only sin being wanting to live happily.

There will be no more humiliation, discrimination, torture and death of those whose only sin has been wanting a free, democratic, and peaceful country, respectful of human dignity, for themselves and for others. On that day, we will celebrate with our hearts and souls the International Day of Liberty, Equality and True Democracy.

I would like to salute the brave women of Iran who have shown the world what it means to resist against injustice and fight for freedom and democracy.

Assaults, intimidation, insecurity, lack of support, denial of rights, humiliation and discrimination against women increase every year under the Iranian regime’s rule and this is why the people took to the streets and said they will not stop until freedom is brought to Iran.

I would like to focus on one important point.

According to reports from officials of the Iranian regime, 8,000 people have been arrested in the recent protests in Iran, including a large number of women. Also, on February 2, Ahmad Khatami, member of the board of the regime’s Assembly of Experts tried to intimidate the protesters at Tehran’s Friday prayer by saying that according to the regime’s jurisprudence, those who come to the streets and protest against the just ruler of Islam, are insurgents against Islam and their sentence is death!

As one of the deputy prosecutors of my country and someone who has worked for 44 years in the legal system, I am very familiar with my country and other countries’ criminal law. I have to say that freedom of speech and the right to peacefully protest are universal, fundamental rights of any citizen and all governments must respect them.

The Universal Declaration of Human Rights, the source of International Law subscribed and implemented by the UN, enunciates and defends principles and rights inherent to the Human Being. It prohibits censorship, imprisonment and torture of any person who expresses and peacefully defends his/her ideas, who publicly protests for better living conditions, social, family, and political rights; it guarantees a fair and just trial, affirms the equality of rights, duties, opportunities and the right of every citizen to freely choose his/her own future.

Democratic nations absorbed these ideas and are living in progress and in a just and fair society, today; they enjoy protection through a constitutional system of democratic law based on human dignity. It is this call that unites us here, today.

Your peaceful struggle to reach this goal has a name and a face: Mrs. Rajavi. Thank you very much for your efforts, dedication and love for peace and freedom. Your fight is valuable and just. You will achieve the victory of freedom, democracy and peace!

It is the right of Iranian women to uproot violence and injustice and they will do this with creativity and determination. They will eliminate all forms of coercions and prohibitions and they have the right to participate in the creation of a democratic and free society.

Madame Rajavi, I thank you for leading this movement and for never stopping to promote Iranian women’s rights and freedoms. They have learned from you that they can and they must participate in every area of the citizens’ life, including the legal, political, and social areas, in the family and in other areas. We witnessed this determination in the recent protests in Iran.

Nothing will stop the women of Iran, not even unjust laws, corruption, suppression or threats.  This is why we can see that Iranian women play an active and pioneering role in all anti-government protests, sit-ins and strikes in the various sectors of life and Iranian economy.

I would like to address the women of Iran.

We are with you and we support you in your just demand to restore freedom and democracy. From here, where I stand today, from this side of the world, we will be your voice in international and legal institutions throughout the world.

I am sure that, very soon, the day will come when the people of Iran are free and justice is done to all those who have abused the laws and the Universal Declaration of Human Rights to suppress their own people. On that day, it will be the women of Iran who will join together to rebuild the ancient civilization of Iran towards a brighter tomorrow.