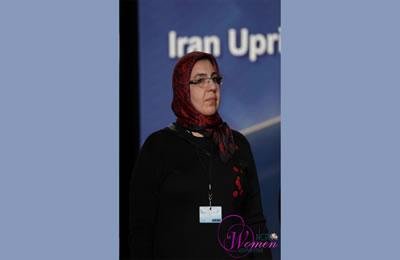 Women of Iran are persecuted for demanding freedom – Khadija Ziyani

From Morocco, the country of cultural and ethnic diversity and the crossroad of civilizations between the North and South and between the East and West, I greet you all with love, friendship, and respect; a greeting for reconciliation and peace and for safety and security.

It is the first time that I am attending this conference. I rarely cry, but today I was deeply impressed by Madame President’s speech and also by the paintings we saw, and by the song which made my tears run.

Indeed, it is really regrettable that Iranian women are subjected to so much oppression, violence, injustice, humiliation, and repression. They are arrested and imprisoned for none but demanding freedom and a decent life.

It is very strange that Iran’s rulers make reference to the very same religion that shuns them for their deeds. As a Muslim Arab woman from Morocco, I declare that Islam is above such despicable and hideous practices. Islam is innocent in the face of what the mullahs have done to the oppressed women of Iran, just as the wolf was innocent of Joseph’s blood. It is innocent from all the Mullah’s deeds with Iran and with the oppressed Iranian women.

Dear Madam, thank you for giving us this great opportunity today to discuss the situation of women in the world, in general, and the situation of Iranian women, in particular; those who have been suffering a great deal.

In the end, I would like to pay a sincere tribute to all Iranian women for their glorious perseverance; those women who long for liberation from extremism.

Glory and freedom to them.  Freedom to all women of Iran.

I conclude with a famous verse by an Arab poet, Abu Al-Tayyeb Mutanabi, who said, “O’ Eid, have you come back with the old things or do you have something new?”

Sincere greetings and may God’s peace, mercy, and blessings be upon you.