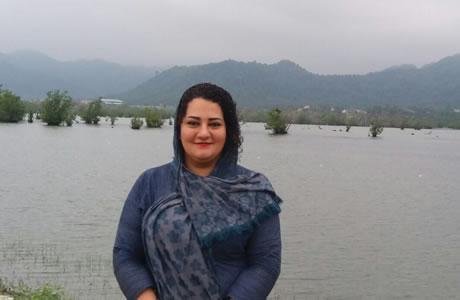 The physical condition of political prisoner Atena Daemi has been reported as alarming.

“After being transferred to Qarchak Prison, Atena (Daemi) has had various physical and nervous problems due to bad prison conditions and tremendous psychological pressure,” a source close to Daemi family announced on Friday, April 13, 2018.

The source added, “After a month, she is still suffering from cold. Her face is numb and the right side has become motionless. Her eyes are protruding and the numbness of her face is spreading to her throat. Her teeth and jaws have also become numb.”

According to this source, a neurologist has examined Ms. Daemi and diagnosed these symptoms as signs of Muscular Sclerosis (M.S.) which probably has been caused by sudden shocks and nervous pressures of the recent past.

Ms. Daemi’s telephone contacts have been strictly limited. In contrast to other prisoners in this place, she has been told that she can make only one call per week with one number, and that telephone number must be provided to prison officials in advance. In protest to these restrictions, Ms. Daemi said she will not make any calls or accept any visits. Neither will she ask to be returned to Evin Prison.

Ms. Daemi had been following up since January to receive a furlough for participating in her sister’s wedding on April 13, 2018, but she was not granted a leave because she had not remained silent during this period, and had protested and informed the public about her conditions.

Iran: Two women were brutalized during farmers’ protest in Isfahan