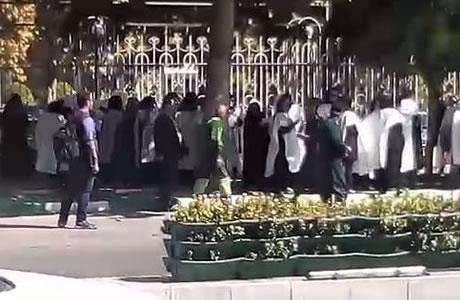 Iran: Women wear shrouds and protests against Shandiz in Mashhad

Women whose properties have been plundered by the fraudulent Padideh Shandiz company in Mashhad (NE Iran), once again wore shrouds and staged another protest.

The protesters have not yet received any response on reimbursement of their properties after four years.

The protest took place on Thursday, April 12, 2018, outside the Prosecutor’s Office in Mashhad, capital of Razavi Khorassan Province in northeastern Iran. The protesters chanted slogans demanding dissolution of Padideh Shandiz company and putting it on auction.

The State Security Force arrested 12 of the protesting women and men.

One of the banners carried by the protesters read, “30,000 workers insured by the Padideh Shandiz Project have been laid off and it was the Public Prosecutor of Razavi Khorassan (Province) who caused escalation of the unemployment crisis throughout the country. Who is going to answer this oppression? Is there anyone who could help?”

Padideh Shandiz International Tourism Development Company (known as Padideh Shandiz) is an Iranian private joint-stock holding company active in restaurants, tourism and construction. In 2015, it was accused by a prosecutor in Mashhad of a fraud worth $34.3 billion.