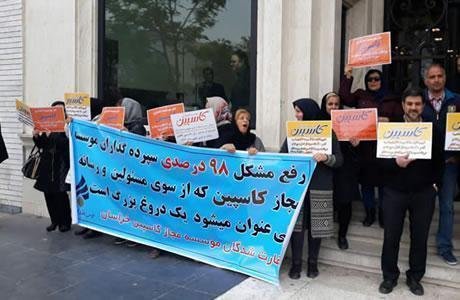 Plundered clients of Caspian and Arman-e Vahdat fraudulent financial institutes, men and women, staged protests on Sunday, April 15, 2018, outside the companies’ branches in Ahvaz, capital of the southwestern Iranian province of Khuzestan.

Women whose assets have been swindled by the Caspian Institute gathered outside the company’s Pamchal branch on Sajjad Blvd. They stressed that the officials’ claims as reflected in the state media indicating that the problems of some 98 per cent of depositors has been resolved is “a big lie.”

On the same day, women plundered by Arman-e Vahdat Institute gathered outside the company’s Shariati branch in Ahvaz and staged a protest. Protesters also locked up the entrance to the company’s branch called Melal, and covered with mud the door of another branch called Zeiytoon.