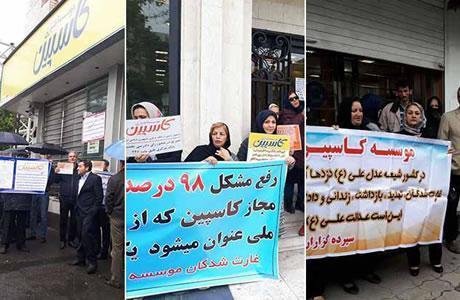 Plundered women continued their protests in Tehran, Rasht, and Ahvaz on April 16, 2018.

In Tehran, plundered clients of Caspitan Institute gathered outside Sattar Khan branch and demanded their money back.

In Rasht, capital of northern Gilan Province, women plundered by the fraudulent Caspian Institute pelted stones and rotten eggs at the entrance door of the company’s Sarparasti branch.

In Ahvaz, capital of the southwestern province of Khuzestan, plundered men and women staged a protest outside Caspian’s Melal Branch and chanted slogans, vowing to earn their rights but not surrender.

The protests by men and women plundered by various fraudulent financial institutes have been going on since last year, but they have not received any response to their demands.