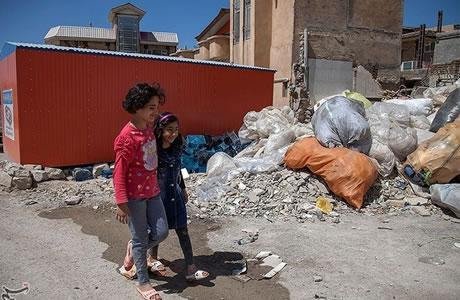 Five months after the devastating earthquake that struck Kermanshah on November 12, 2017, residents of the affected areas are still living in deplorable conditions. Countless number of women and innocent children earthquake survivors are deprived of their most basic needs.

The powerful magnitude 7.3 earthquake destroyed whole buildings and ripped off their facades in the western Iranian province. The Mehr Housing Complex buildings constructed by the government did not tolerate the severe shakings and collapsed.

According to official figures, the deadliest earthquake of the year killed more than 600 people, injured more than 9,000 and left tens of thousands of earthquake survivors without shelter.

Rouhani’s government officials promised to help resolve the people’s problems with everything in their power. In his visit during Nowruz, Rouhani promised to renovate the damaged areas by the end of summer 2018. However, local officials say that some 60 per cent of the residents of affected areas have not received trailers and are living in tents. Even the trailers donated by private citizens have not been handed over to those in need. So, they have to live in tents or the ruins of their previous houses.

Lack of adequate shelter led to the deaths of a considerable number of children due to high fever, infection and other illnesses caused by the freezing cold of winter.

Sanitation is literally non-existent in the areas affected by the earthquake.

Most of the earthquake survivors do not have access to clean potable water due to broken pipelines. In some areas, water is contaminated and shortage of chlorine is a major problem.

Most areas are not drained of waste water and their garbage is not collected. As a result, the areas surrounding the temporary residences of earthquake survivors are extremely contaminated.

Strong odor, insects and rodents have taken over the areas and snakes and scorpions are prevalent in the ruins of the buildings, jeopardizing the survivors’ health and safety.

Local officials say some 30 per cent of the livestocks have been killed in the earthquake. No action has been taken to remove the corpses of animals and the garbage. Many sewage structures have been damaged and there is a threat of dangerous diseases spreading.

Pregnant women face the most problems. The number of miscarriages among pregnant women has surged. Most of them also suffer from infection due to the difficult conditions of living in tents for months.

Warming up of the weather signals more difficult days for the survivors living in tents and trailers. And women and children are the ones who have to suffer the most in such circumstances.

Psychological problems in the quake–stricken areas

Recent researched indicates that anxiety and depression are more common among women in these areas, both qualitatively and quantitatively.

Hot weather has added to their pains as the tents and trailers are tightly aligned and sometimes, family quarrels pour out of the tents, adversely impacting the children.

A local psychologist said, “The biggest predicament of women is pregnancy and the mental disorders associated with it.”

Some 700 pregnant women have been identified in 300 villages struck by the earthquake.

The next problem women and children have to grapple with is post-trauma hyper-sensitivity, the psychologist added. “They are waiting for the eruption of another earthquake at any moment. Things that make them think of this are barking of dogs and the sound of rain hitting the roof of the trailers.”

Another psychologist said, “In field psychology in Sarpol-e Zahab, we found out that stress and anxiety continue to remain as the most common psychological problems of people in this area. Anxiety in children is very dangerous and if they are not treated, they can be severely hurt. Most of the children use the color black in their drawings.”

A female social aid volunteer who had been hurt during the earthquake and received 100 stitches on her wounds says, “Women who have survived the earthquake are in pain. They sit around fire at nights and speak together about their problems. They need someone to listen to them, but there is no one to do so. Even the state media do not report on their situation in these areas, as often as they should.”