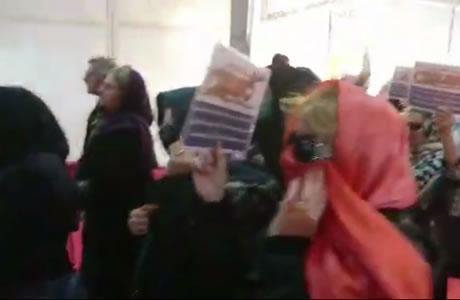 Women plundered by IRGC-backed financial institutes participated and led two of the protests in Tehran and Ahvaz.

Wednesday, April 18, 2018, women and men whose properties and assets have been swindled by Caspian Institute, marched into the banks section of Tehran’s International Exhibition and chanted slogans. (See videoclip)

Addressing the mullahs’ President Hassan Rouhani, they chanted, “Rouhani, the liar, where is our money?”, “(Central Bank President) Saif commits crime and the government lends him support.”

Also on Thursday, April 19, 2018, women and men plundered by the Melal financial Institute in Ahvaz, held a picket line to demand their money back. Women led the protest. (See videoclip)

Despite passage of one year since the escalation of protests by plundered men and women in Iran, Rouhani’s government has not responded to any of their demands or delivered on their promises.