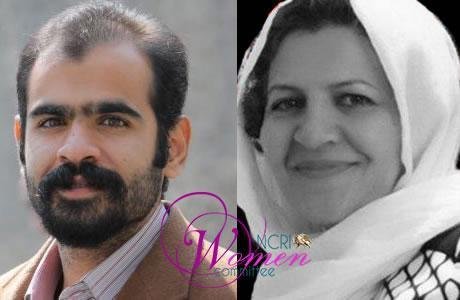 The life of prisoner of conscience Shokoufeh Yadollahi, a Yarsan woman who was badly beaten in the head during arrest and detention, is in danger as she has been denied medical care.

Ms. Yadollahi was brutalized and arrested on February 20, 2018, during security forces’ crackdown on the protest of Gonabadi Dervishes (Yarsan) in Tehran.

She was hit in the head by batons and seriously injured on the left side of her head, with her skull fracturing in the forehead. Despite bleeding from mouth and nose and suffering from broken ribs, Ms. Yadollahi was taken to Shapour Detention Center and subsequently transferred along with nine other women to Qarchak Prison.

Ms. Yadollahi was not released the first night because she is the mother of Kasra Noori, also a prisoner of conscience.

In Qarchak, Ms. Yadollahi was taken to solitary confinement in a cell without heating. As a result of her protests, a doctor examined her the next day and diagnosed that she needs to be sent to hospital. However, the guards in charge of taking her to hospital disrespected her and wanted to cuff her hands and feet, as a result of which she refused to go.

After a month, the eleven Yarsan women were transferred to a room in the quarantine of Qarchak. During her detention, Ms. Yadollahi has been suffering from headache and dizziness. After some time, she realized that she has lost her sense of smell. Her blood pressure is abnormally high and the prison’s doctors are convinced that she is in perilous conditions.

Doctors have issued her a hospitalization order but she has not been hospitalized due to limited facilities and because it is not clear which judge is presideing her case.

Doctors concur that she is in dangerous conditions because of the blow to her skull which has most probably caused displacement of her brain. There is also the possibility of blood cloth formation in her skull and veins. So, she needs to be immediately hospitalized in a hospital specializing in this field.

Ms. Yadollahi and other Yarsan women have been repeatedly interrogated under such circumstances and placed under psychological pressure.

The lawyers and families of the Yarsan women have provided documents and bail to free them, but the authorities have refused to accept bail to release the prisoners.