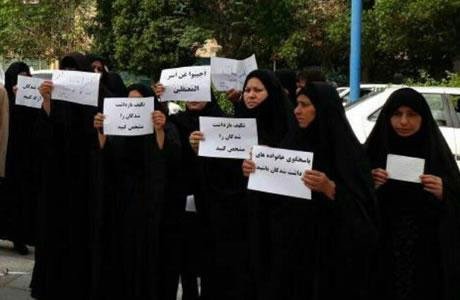 Iran: No information on the status of two women arrested in Ahvaz

Twenty days after the arrest of two women in Ahvaz, southwestern Iran, there is no information on their whereabouts and conditions.

Ezzat Ka’abi and Nadia Mohammadipour (Hamidi), both married, were arrested 20 days ago by agents of the Intelligence Department of Ahvaz and taken to an unknown location.

Their families have not been able to obtain any information on their place of detentioin or their conditions despite referring to security agencies and courts.

Khalediyeh Tarfi and Leila Bervayeh have also been identified among the women arrested in Khuzestan.

The people of Khuzestan took to the streets of Ahvaz and other cities for more than a week beginning on March 28, 2018, to protest against the state televisions offensive approach by ignoring the Arab ethnic group in its program. Women were actively involved in these protests.

More than 400 persons including dozens of women were arrested in these protests.

The names of Ayesheh Neassi, 19 and student of English language at Payam Nour University, and Khadijeh Neassi had been already published among the arrested women.