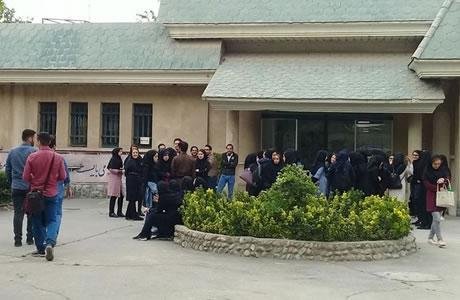 Iran: Young women of the College of Environment staged a strike

Young women participated in an act of protest at the College of Environment in Karaj, where students refused to attend classes to protest transformation of the college into a training center for environmental protection guards.

The College of Environment in Karaj is the first and only specialist school of environment in Iran and the Middle East since 1972.

The decision to transform the college into a training center is attributed by the press to Eassa Kalantari, head of the Environmental Protection Organization and deputy to Hassan Rouhani, the mullahs’ President.

According to this decision, the college is not going to admit any more students. On Saturday, April 21, a number of professors of the school’s faculty of science were dismissed in the middle of the term and replaced by temporary instructors. Those students who were writing their final thesis have lost their supervising professor as a result of the dismissals while only six sessions remain from the term.

A number of protesting students have been threatened to be expelled from school. At the same time, a number of experienced employees of the college have been laid off and threatened to be deprived of their unemployment insurance. (The state-run Mehr news agency – April 22, 2018)

Iran: No information on the status of two women arrested in Ahvaz