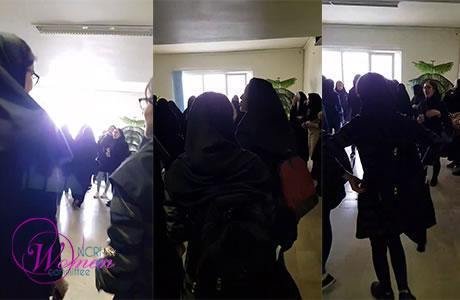 Several protests took place in Tehran and other cities across Iran on Tuesday, April 24, 2018, where women actively took part in them.

Young women studying in College of Environment in Karaj staged a protest. The college’s female students chanted in unison, “The status of students must be determined.”

Based on a decision made by Eassa Kalantari, head of the Environmental Protection Organization of Iran, the College of Environment will not admit new students in the new academic year and is going to be turned into a training center for environmental protection guards.

The decision was accompanied by expulsion of a number of professors and members of the Faculty of Science from the college which has led to student protests since April 21, 2018.

In another protest, depositors of Caspian Institute in Tehran gathered in front of the company’s branch on Fatemi Ave. and demanded to have their deposits back.

Also in Mashhad, people plundered by Afzal Tous Institute gathered in protest in front of its building on Sajjad Blvd. and chanted, “If Saif flees Iran, there would be an uprising throught the country” and “One less embezzlement could solve our problem.”

Iran: Young woman to be jailed five years for her faith