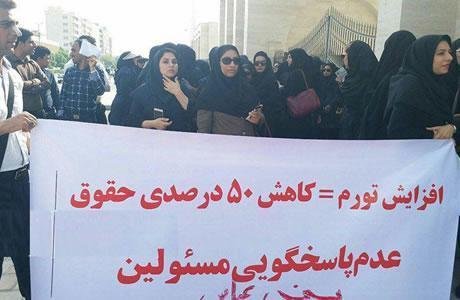 Numerous protests took place in various cities across Iran on Wednesday, April 25, 2018, and women actively participated in a number of them.

In Bandar Abbas, the female personnel working for the Plan to Evolve Health and Medical Network staged a protest against officials’ lack of accountability and failure to raise their salaries in the face of rising inflation.

In Tehran, women and men plundered by Arman Institute gathered in front of the Commerce Bank and demanded reimbursement of their assets. One of the protesters held a banner which read, “What I had earned in young age for the future of my child has been squandered by Arman Institute under the supervision of the Islamic Republic’s Central Bank. Is there anyone who could do justice?”

In Mahshahr, a group of women and men gathered in protest outside the Justice Department’s building, demanding serious action against a father and a stepmother who had tortured three innocent children.