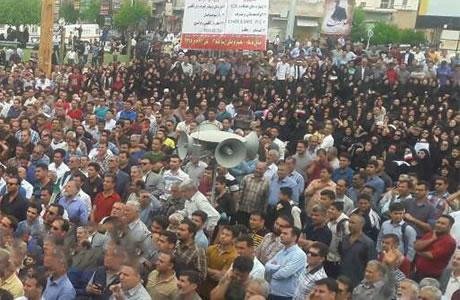 Iran: Thousands of women and men take to the streets of Kazeroun

Thousands of residents of Kazeroun including a large number of women once again took to the streets and the main square of this city in southern Iran to express their protest.

The gathering comes in the wake of consecutive protests last week to the decision of city officials to divide Kazeroun.

The protesting women and men walked from the main square to the mosque where the Friday prayer was being held and chanted slogans against the regime. The protesters demanded the Governor to personally appear before them and account for the decision.

Women have played an active role in the protests in Kazeroun which has started since April 16.

In another protest in Ahwaz, southwestern Iran, the inhabitants of Abu-Havan village including a large number of women staged a protest outside the Governor’s Office on Wednesday, April 25, 2018, against the lack of water and power in their village. This is the second time these villagers go to Ahwaz and protest.

Iran: Women make up 60 per cent of illiterates