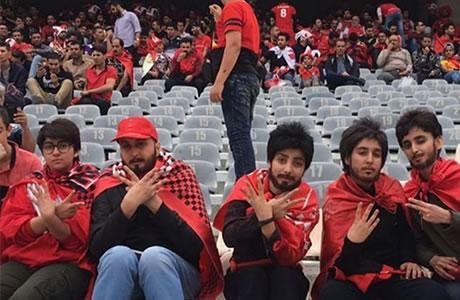 Two young women were arrested in Isfahan (central Iran) on Friday, April 27, 2018, for attempting to enter the Naghsh-e Jahan Stadium to watch the match between their favorite football teams.

On the same day, three young women were identified and arrested by security forces outside Tehran’s Azadi Stadium for attempting to enter to watch the football game. (The state-run Fars news agency – April 27, 2018)

However, five young women who managed to sneak through and watch the game in the stadium, published their photo on social media.

Iranian women are banned from entering stadiums to watch football games and those who try to do so are arrested. But Iran’s young women and girls have refused to abide by this rule; they enter stadiums in various ways and make their photos public as an act of protest.

Women made headlines on March 1, 2018, as they attempted to enter Azadi Stadium to watch the game between Iran’s top teams. The State Security forces prevented entry of 35 women and held them in detention.

Shahindokhot Molaverdi, Rouhani’s deputy in citizens’ affairs, proclaimed that the circumstances for women’s presence in stadiums have not been prepared, yet. (The state-run Entekhab.ir, October 25, 2017)