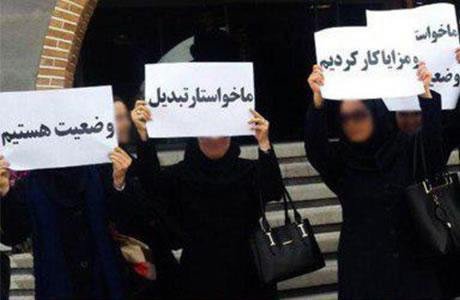 A group of families of the men and women arrested in recent protests in Ahwaz, SW Iran, gathered outside the city’s court on Sunday, April 29, 2018.

More than 400 protesters including a number of women are presently held in detention.

Participants in this protest gathering, most of whom were women, demanded determination of the status of their children.

Judiciary and security officials had previously promised that all the arrested protesters were going to be released. However, only five have been temporarily freed from jail, so far, until their sentences are issued. The bailbonds set for the detainees are very high and the families do not afford to provide the necessary property documents to deposit as bail.

Ahwaz is the capital of the oil-rich Khuzistan Province, in southwestern Iran.

Also in Tabriz, NW Iran, a group of women who have worked on temporary contracts for the city’s municipality staged a picket line outside the building. They have not received any benefits for years and demand to be officially employed by the municipality.