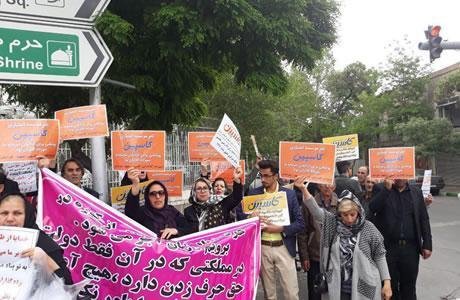 Plundered women of Iran participated in protests in Mashhad, Tehran and Aligoudarz in recent days.

Women and men plundered by the Caspian fraudulent institute staged a protest outside the Governorate of Mashhad on Tuesday, May 1, 2018.

The protesters in this second largest city of Iran in the northeast, held a big banner which read, “We have a lot to say, but if we do so, we will not be able to earn our living. In a country where only the government has the right to speak, people should not believe anything.”

Another large gathering of plundered women and men was held outside the Minsitry of Agricultural Crusade on Vali-Asr Ave. in Tehran, on Monday, April 30, 2018.

Clients robbed of their savings by Alborz Credit Institute, including a remarkable number of women, banged on doors and walls and created a lot of noise to attract attention despite heavy presence of anti-riot guards and security forces. They chanted, “Our savings have been stolen and plundered.”

On the same day in Aligoudarz, in western Lorestan Province, held a protest outside the Melal Credit Institute and closed up its office.