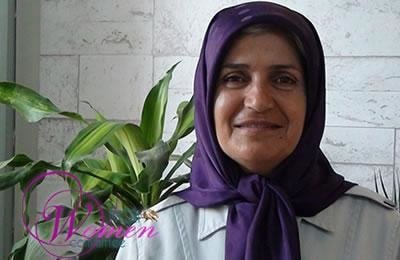 She confidently and calmly sits behind the wheel of a vehicle, a trailer, or a heavy haul truck and maneuvers skillfully on her own will. The mechanics and engine operations of these machineries seem so trivial to her. Not many women in the Middle East or even Eastern Europe can match her expertise and toughness.

She is Akhtar Shamim. She explains her acquaintance with the Iranian resistance so elegantly: “I was 12 when my father had a stroke and passed away. I looked for a role model – a strong woman who could lead me forward. When I was 14 years old, I found one, it was one of the young female supporters of the People’s Mojahedin (PMOI). She was very brave, serious, and determined.

“Sometime passed and then came the February 1979 revolution in Iran. We were living in Hamedan, but because my brother and sister were active Mojahedin supporters in Tehran, I decided to join them.

“Our lives changed drastically from that moment; our number-one priority was resistance against the newly-formed dictatorship that started imprisoning and executing freedom fighters shortly after the revolution. Our activities started with distributing leaflets, selling (the PMOI) newspaper, spreading social activism, and more. Soon it was 1981, a brutal crackdown and a semi stop to my activism. I was in Iran until 1989 when I was able to leave and join the Mojahedin in Camp Ashraf.

“Leaving Iran and leaving my family behind was the most difficult decision in my life. I still remember the very moments. I was feeling that Iran’s soil, its allies, our house, our town, my neighbors, friends, family members, etc., were on one side, and joining the resistance on the other side. I had to give up a lot, but was it the only way to bring freedom to my country? The memories were marching in front of my eyes. The images, the bonds, the intimate relationships, all made it more and more difficult for me to make a decision.

“May be everyone faces such a moment only once in her lifetime, a moment when two very powerful but contradicting forces pull you in two different directions and make the decision extremely difficult. Without any doubt, this was the hardest decision of my life and despite many other difficult moments since then, I still feel the difficulty of that decision moment.

“I am very happy that in that difficult decision-making moment, I was able to positively make my decision and join the resistance. And now, before all of you, I am proud to say I am one of the 1,000 free and emancipated women of the Iranian resistance.

“That elegant decision is the most important achievement of my life and I am very proud of it.”