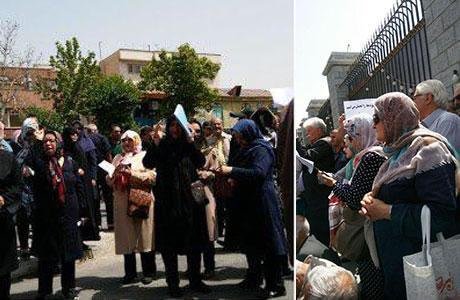 A large group of women were among the retired personnel and teachers of the Education Ministry who gathered outside the mullahs’ parliament in Tehran on Tuesday, May 8, 2018, and protested against their deplorable living conditions.

Women plundered by Caspian Credit Institute gathered outside one of the company’s branches in Rasht, northern Iran, and expressed their protest.

Clients cheated by Arman-e Vahdat Credit Institute gathered outside the Melal Institution in Tehran, and chanted slogans against the company which has pilfered their savings.

A group of teachers and activists, women and men, gathered at the grave site of the legendary Iranian wrestling champion, Gholamreza Takhti, and honored his memory on at Ibn-e Babveyh cemetery in Shahr-e Ray, south of Tehran.

Also on Monday, May 7, 2018, a group of young men and women studying at the University of Zanjan held a protest gathering and demanded attention and accountability on the part of the officials.

A number of families from six villages of Boyerahmad and Kohgiluyeh Province, in southwestern Iran, got together and held a protest gathering since they have not received any assistance after earthquake hit their villages. The ceilings and walls of their houses have been cracked, but their requests to receive tents have gone unheeded and these people have to sleep in the street.