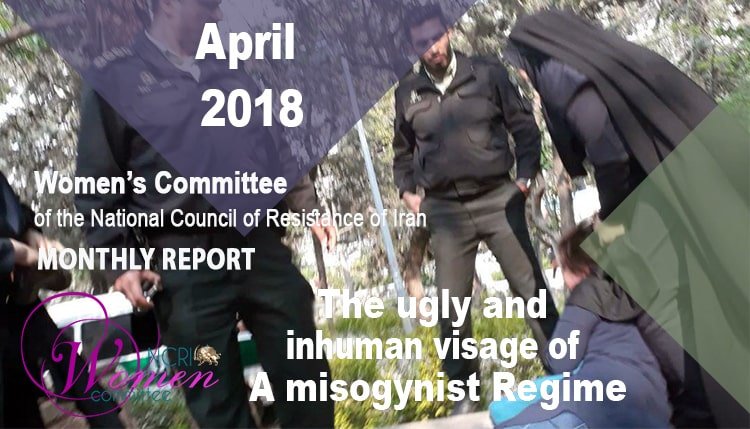 The ugly and inhuman visage of a misogynist regime

One of the most important developments in the month of April was political prisoner Golrokh Ebrahimi Iraee’s ending her hunger strike after 81 days upon the appeals of other political prisoners and some 1,000 human rights advocates and families of execution victims and political prisoners, without achieving her demand despite worldwide pressure on the Iranian regime.

She was sent back to the notorious Qarchak Prison without completing her medical treatment, not to the Women’s Ward of Evin, as Golrokh Iraee had demanded.

Prison officials had vowed not to return her to Evin Prison even if she died. Golrokh Iraee’s persistence on advancing this act of protest to convey her voice to the world by refusing food for nearly three months was a manifestation of Iranian women’s awareness, resolve and courage to pay the cost of defying a tyrannical regime.

There was also news of other women political prisoners who are detained in dire conditions. They included Atena Daemi and Shokoufeh Yadollahi who are imprisoned in Qarchak Prison in Varamin and Zeinab Jalalian who is incarcerated in the Prison of Khoy in northwestern Iran.

Women of Iran also took part in at least 43 protests during April. They played active roles in the extensive protests by Arab Iranians in various cities across Khuzistan Province (SW Iran), farmers in Isfahan (central Iran) and the people against the division of Kazeroun in Fars Province (S Iran). They played key and leading roles in the protest movement of a vast sector of Iranian society in fighting against government-backed financial corruption.

However, the incident which caused much outrage inside Iran and around the world was the brutal mistreatment of a few young women in a park in Tehran for failing to properly cover their heads.

Another glimpse of daily terrorizing of women

A video clip disseminated in the social media on April 18, showed at least four Guidance Patrols attacking four young women in a park, beating and shoving them around for improper veiling and refusing to get on the Patrol’s van. One of the young women suffered from a heart condition and went unconscious as a result of the beatings.

The video clip rapidly went viral and raised public outrage in Iran and around the world so much that a number of regime officials including the Minister of Interior had to speak out against the patrols’ savagery and promise to follow up the case and have the involved agents punished.

Even the SSF spokesman, Saeed Montazer ol-Mehdi, could not defend the Guidance Patrol agents and said, “Such a behavior on the part of police agents is not endorsed by the SSF.”

Rouhani’s deputy for women and family affairs, Massoumeh Ebtekar, condemned the act and said it could not be justified in any way.

But on April 20, Mullah Alam ol-Hoda, Khamenei’s representative in Mashhad, denounced those who had defended the women victimized in this incident, saying, “A wrongdoing by an officer or agent should not undermine the essence of this religious vice.”

On April 23, mullah Sadegh Amoli Larijani, head of the Judiciary Branch, stressed in a speech on the need for the State Security forces to act within the frameworks of religion and law. He reiterated, “No one should be allowed to resist against law enforcement by the State Security Force or insult its officers. The SSF will not take even one step back.” (The state-run ISNA news agency, April 23, 2018)

On the same day, Kayhan daily the mouthpiece of the mullahs’ Supreme Leader, called for praising the policewoman. “It is very logical that the policewoman involved in the incident be praised and encouraged by the Interior Minister and the SSF Commander.”

Hossein Rahimi, Tehran’s Chief of Police, denied reports that the officer beating up the young women had been suspended. He declared, “We powerfully defend our agents.” (The state-run Fars news agency – April 30, 2018)

Alireza Rahimi, member of the parliamentary Committee on National Security and Foreign Policy, also tweeted on April 30 that the committee had held a meeting with SSF commanders where the Commander of the State Security Force, Hossein Ashtari, announced that the officer involved had been granted a plaque and honored at the SSF command headquarters only two days after the incident.

The IRGC-backed Fars news agency went to the aid of the State Security Force by claiming that the victims had deliberately incited the attack and the fact that they had a camera to shoot the film, proved that the incident had been planned for taking political advantage.

The despicable approach of a moribund regime

The regime’s outrageous handling of this case despite overwhelming domestic and international repugnance revealed, as Maryam Rajavi declared, the ugly, inhuman and anti-Islamic visage of the misogynous mullahs ruling Iran who have stepped up suppression of women as a means for escalating the general atmosphere of repression in society.

Twenty-six government and state agencies as well as 301 associations are in charge of monitoring Iranian women’s observance of the compulsory veiling. They have nevertheless failed after 39 years to compel the courageous women of Iran to succumb to what is not their own free choice.

SSF Commander Hossein Ashtari asserted last year that some 2,000 women are arrested in Iran every day for not observing the proper veiling standards. As the video clips shot by amateur passers-by show, this means the 2,000-fold daily repetition of such violent terrorizing of women across the country. Iranian women are defying the compulsory veil despite such brutality.

Another shameless incident happened in Tabriz on April 27, when the chasing of a young couple by the State Security Force’s Moral Security Police led to the death of the woman and injury of the man as the driver lost control and crashed with a bus. The young woman, Elnaz Sane’ii, got killed in this accident and the young man was apprehended despite his injuries.