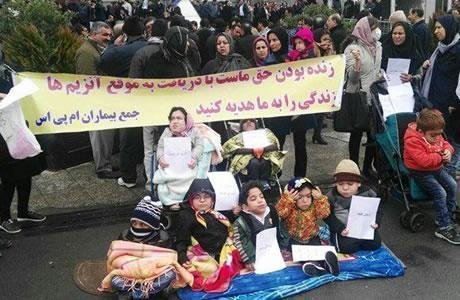 Iran: Nurses and the sick protest in Mashhad, Tehran

A group of women nurses held a protest gathering in Mashhad, the second largest city of Iran in the northeast.

They gathered in protest in Navab Safavi Street and Razavi Sharestan on Tuesday, May 8, 2018 against lack of transparency in distribution of the shares belonging to a construction project called Iman-e Mashhad.

In Tehran, mothers and families of MPS patients gathered in protest in front of the Health Ministry.

This gathering under the slogan of “we want to live and life is our right” was held on Monday May 7, 2018, in front of the Iranian Health Ministry in Shahrak-e Qarb.

Accompanied by their mothers and relatives, children suffering from MPS demanded medication. The treatment cost of the rare disease is 700 million toumans (approx. $100,000) a year which the families do not afford.

There are a limited number of such patients in Iran. A few months ago in a meeting with their families, officials of Food & Medication Organization had told them that the organization does not afford the high cost of medication and can provide it for only 15 out of 50 children, meaning that the 35 others are doomed to await death.

The Health Ministry is not planning to look into this matter. The ministry fakes his lack of medical provision and dedicating the budget to 100 MPS patients as if the people are not content to help such patients.

MPS, or Mucopolysaccharidosis is a rare genetic disorder that affects many body systems and that leads to organ damage. It is caused by a mutation in the gene that makes an enzyme called alpha-L-iduronidase.