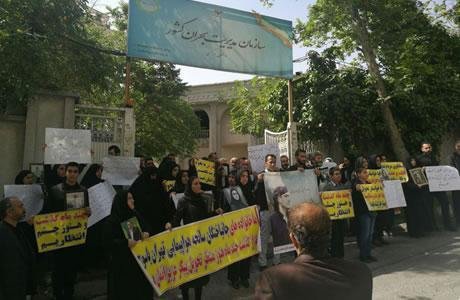 A group of families and survivors of victims of a Tehran-Yasuj plane crash gathered in front of the Crisis Management HQ in Tehran on Sunday, May 13, 2018, demanding to receive the bodies of their loved ones. Yasuj is the capital of Kohgilouyeh and Boyerahmad Province in southwestern Iran.

The families had previously held a similar gathering in the same place on April 21, 2018, in protest to official delay in searching and finding the bodies and determining the reason for the crash after two months.

All 66 passengers and crew onboard this Iranian commercial flight belonging to Aseman Air died after the plane crashed on Sunday, February 18, 2018, into Mount Dena, (in the south of the country); the plane was 20 years old.

On the same day, families of those arrested during the protests all across Khuzestan Province, including a large number of women who are the mothers and wives of the prisoners, held a protest gathering outside the Revolutionary Court of Ahvaz in Kianpars and demanded to be informed of the fate of their loved ones.

On Saturday, May 12, 2018, in Tehran, a group of women and men plundered by the IRGC-backed Caspian Credit Institute gathered in protest outside the court for financial and banking crimes.

On the same day, a group of young women and men studying at Ferdowsi University of Mashhad, gathered on campus to protest against a deduction in educational years. Mashhad is the second largest city of Iran and capital of Khorasan Razavi Province in Northeast of Iran.

On Friday, May 11, 2018, a group of land owners including women and men held a protest in Hashtgerd, in Alborz Province (central Iran), against confiscation of their lands by government officials, demanding to have their lands returned as soon as possible.