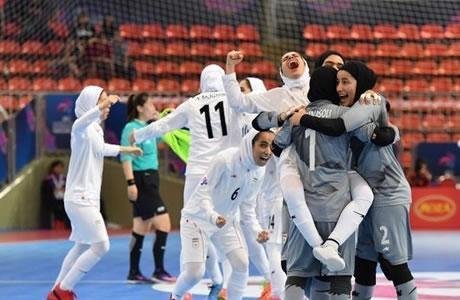 With the victory of the Iranian women’s futsal team over Japan’s in the final game of the 2018 AFC Women’s Futsal Championship, the state television’s failure to broadcast the final game has turned into a political challenge for the Iranian regime. A journalist warned about this in a column:

The case of women’s futsal games is gradually turning from a sports issue into a special social issue. Today, these women are not just futsal players. Each of them is a heroine who has struggled against all restrictions, as well as ethnic and tribal prejudices to achieve what this sector of society demands. If we don’t take action in time, what seems like a simple issue will turn into an intricate political matter and these futsal players will turn into heroines who issue a statement against the status quo everytime they kick the ball. So, let us not make the issue more complicated and instead of strange legislations, answer the numerous questions that exist in society. First of all: If women can watch men’s soccer on TV, why shouldn’t men watch women’s matches on TV?” (The state-run Etemad daily – May 13, 2018)

Women’s sports do not enjoy any backing from the government and women face multiple obstacles to enter international tournaments. Broadcasting women’s matches are forbidden for the state-run TV and even reporters are not allowed into places where women compete.