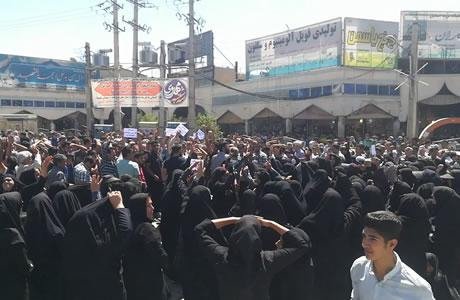 Thousands of men and women took to the main square of Kazeroun on Wednesday, May 16, 2018, in protest to the division of this major city in Fars Province in southern Iran. Women’s participation in this protest march was numerous and active.

The demonstration started in the morning and continued past midnight.

The State Security forces used tear gas and opened fire on the demonstrators, killing at least three and wounding dozens including women.

In the course of these clashes, angry protesters attacked and set fire to a police station and a State Security Force (SSF) vehicle. They chanted, “Kazerouni will die but not give in to subjugation.”

Hundreds of protesters were arrested. Subsequently, their families gathered outside the Department of Intelligence in Kazeroun and demanded freedom of their loved ones. Women’s participation in this gathering was overwhelming and their cries loud and clear.