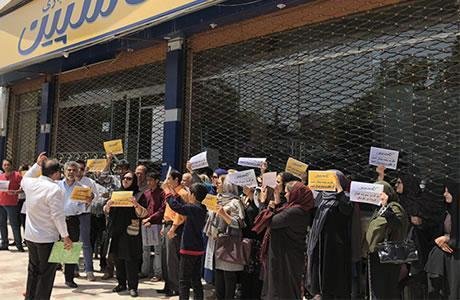 Protests by all social strata continue all across Iran and women are present in every scene.

The residents of Kazeroun took to the streets again on Thursday, May 17, 2018, to protest against the atrocities of security forces the night before. And again they were attacked. Clashes spread throughout the city and the city’s atmosphere was tense all day.

At least two protesters were killed and dozens more were wounded or arrested. To prevent the news of the protests from leaking out, the Iranian regime has disconnected the city’s access to the internet and social media. On the same day, plundered women and men gathered in protest outside the Caspian Institute’s branch in Bassij Square of Kerman, southern Iran, against the company’s pilfering of their savings and deposits. During the event, an elderly woman went through convulsions. The protestors pelted tomatoes at the state-run institute while chanting slogans against Valiollah Saif, President of the Central Bank of Iran who has recently been blacklisted by the U.S.

On May 16, 2018, the wives of HEPCO workers joined their husbands on the third day of their protest and sit-in. Heavy Equipment Production Company (HEPCO) produces road construction equipment and is located in Arak, capital of Markazi Province, southwest of Tehran Province.

On the same day, the State Security forces cracked down on the inhabitants of Abrak Azhgil village in Izeh, Khuzistan Province, opening fire on them. A 38-year-old woman was killed and two persons were wounded during the attack.

On May 15, 2018, young women and men, students of Technical School of Yazd University and the students of Kermanshah’s Industrial University staged protests for the second day in a row, against the new policy of demanding tuitions from students, and other problems in the university.