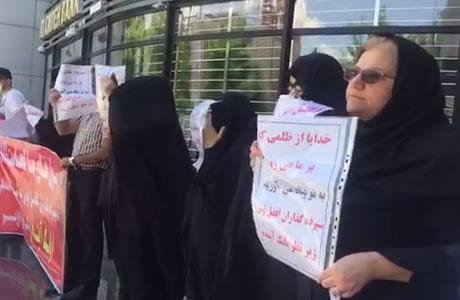 In protest to the plunder of their belongings by the Caspian Institute and its failure to reimburse them, the defrauded clients staged a gathering protest in Sajjad Blvd. of Mashhad outside the company’s Pamchal Branch.

Despite repeated referrals of the protesters, officials of the Justice Ministry, Governor’s Office and the Caspian Institute have not responded to their demands.

In an effort to dodge responsibility, the Deputy Governor of Khorassan Razavi Province announced that the issue of Caspian Institute is being followed up by the Central Bank and they do not have any information of the procedures.

Iran: Life of Yaresan prisoner of conscience in danger in Qarchak