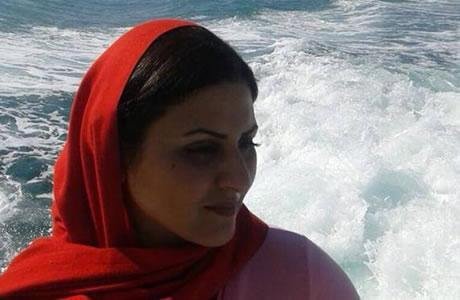 Golrokh Iraee ever more determined to bring about change

Political prisoner Golrokh Iraee who ended her 81-day hunger strike on April 24, 2018, has been returned to the Women’s Ward of Evin Prison, as she had demanded. Following are excerpts of the first letter she has sent out after going back to Evin.

Golrokh Iraee began her letter with commemorating martyred Kurdish teacher, Farzad Kamangar, who was executed on May 9, 2010, along with four other Kurdish political prisoners. The rest of her letter is filled with expressions of gratitude to those who supported her during her hunger strike and with vows to continues her struggle for a free Iran.

Following are excerpts of her open letter:

It’s a tumultuous time. Every throat that cries out is pierced with bullets.

We have to moan inside. We have to cry out inside ourselves.

Our hands search, but the more they do so, the less they find the future that for over a century, we have been sacrificing for, putting our lives on the line and our heads in the noose.

Because those who step into this path are few, and the rest have kept their red tongues in the mouth, so that their green heads would remain on their bodies.

So, where could be more worthy for us than the grim (prison) we’re in today. We would better get on our saddled horses and ride off to our destination.

I am grateful to each and every one of you, although my gratitude cannot be expressed by words. I gained energy from your presence and the power to endure in all the difficult days I went through.

I hope I am worthy of holding your hands and walking in step with you to thread along this tortuous path which leads to a free future, to the freedom of Zeinab (Jalalian) and Ramin (Hossein Panahi), and to a society where there no longer is any poverty, no fear of breaking the pens.

Besides appreciating my comrades and loved ones who stood by me, I am also grateful to all the prisoners of Qarchak Prison of Varamin, who stood by me and Atena (Daemi) and shared their experiences with us.

These dear friends were themselves, victims of poverty and discrimination, victims of the disgusting class difference, victims of lack of awareness, and victims of harsh, irrational and reactionary laws.

Every one of them could write a whole chapter of the book of pains of this volatile society.

Having felt their pains, I am ever more determined to bring about that major change that was only a whisper yesterday but today it is an outcry which shakes the entire city.

Iran: 10 young women and men arrested at a party