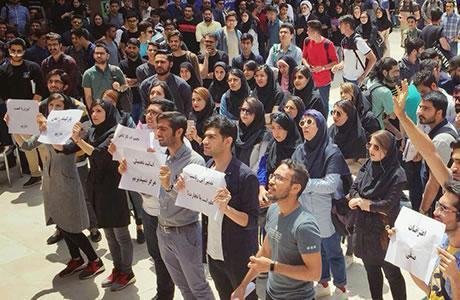 Iran: Women participate in protests in Tehran and Rasht

Women actively participated in protest gatherings of students and plundered people in Tehran and Rasht, capital of Gilan Province, in northern Iran.

On Tuesday, May 22, 2018, women and men plundered by fraudulent financial institutes gathered in protest in front of Majlis, the mullahs’ parliament but the State Security forces raided the gathering, brutalizing and arresting the protesters even women.

On the same day, women and men plundered by the IRGC-backed Caspian Credit Institute in Rasht gathered outside the Sarparasti branch and set fire to the effigy of Valliollah Saif, President of the Central Bank of Iran. They pelted eggs and rotten tomatoes at the building.

Also in Rasht, angry protesters plundered by Adineh Commercial Complex staged a protest demanding to be reimbursed for their plundered assets.

Women and men, swindled by Ayandeh Bank in Tehran gathered in protest on Monday, May 21, 2018 and chanted against the bank officials. They chanted: “Ayandeh Bank is a thief; it steals your money.”

Students of South Tehran Azad University walked out of their classes on Monday, May 21, 2018, to protest against corruption of the university’s administration and other problems on campus. The demanded action by university officials.

Iran: Women widely participated in funeral of martyrs of Kazerun