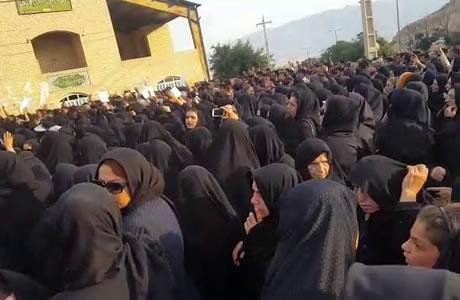 Iran: Women widely participated in funeral of martyrs of Kazerun

Thousands of residents of Kazerun participated in the funeral procession of three young men martyred in the recent protests in Karezun on Tuesday, May 22, 2018. Women’s participation was particularly extensive.

Omidreza Yousefian, Ali Mohammad Azad and Hadi (Mehdi) Jahantab were killed in the clashes which ensued the protests in Kazerun on May 16 and 17, 2018.

Intelligence agents, State Security forces and plainclothes agents tried to prevent chanting of anti-government slogans in the funeral procession, however, the participants coming from all across the city did not heed them and chanted slogans such as “My martyred brother, we will continue your path”, “Free my imprisoned brother”, and “death to the dictator.” They thus expressed their strong dislike for the clerical regime.

Iran: More guidance patrols to crack down on women