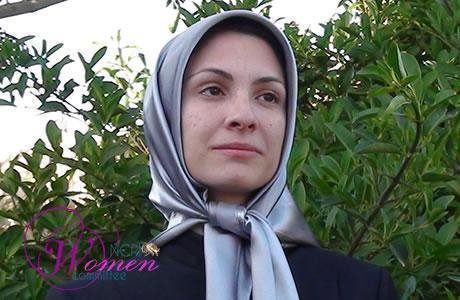 Hejrat Mo’ezzi: Lighting up the darkness for women in my homeland

Behind her calm face is an impassioned soul, a soul which searches for peace and happiness of others. Hejrat Mo’ezzi recounts her story:

Ever since my childhood, I wanted to prove I have the same mental and behavioral capacity as men.  Contrary to the customs and traditional practices in our society and many other places which assign dolls to girls and allow boys to play soccer, I never wanted a doll.  I wanted to change the stereotypes that everybody had acculturated to and wished for a world where competency was not predetermined by gender.  For this reason, I deliberately pursued my studies in nuclear physics, a male dominated field.  But that wasn’t enough.

The situation of women and girls got me thinking seriously about the issues in our society. I had witnessed how poverty had forced a life full of hardship and misery upon many people around me, like my friend Neda.
There were many street vendors, little girls selling flowers in traffic, and those who slept in boxes under bridges.

Sometimes it was too much for me to bear the circumstances and innocence of these little girls that all I wished for was to sacrifice my life.

I eventually decided to leave Iran on a very cold winter day in February of 2007 and join the Resistance.  I had come to know the Resistance quite well through my family.

I had grown up learning the history of the Resistance, their anthems, speeches and lectures and was therefore well informed.

I came across closed borders during my departure that winter. The Iranian regime had its agents preventing any entry or departure.  I had no choice but to return.  However, I decided to try once again in the spring.

Fortunately, this time around, I was able to cross the border and reach the headquarters of the Iranian Resistance in Ashraf.

I can vividly recall the meeting between my father[1] and I the night prior to my journey.

He had only one thing to say to me, ‘I want you to know that on your path of joining the Resistance, you should leave no option for returning! Be strong and determined in your choice! Forever…’

And with such support and determination, I closed the door behind me and started my journey.

In Ashraf, it was as if I was a fish who had reached water.

I encountered a large group of women, all of whom strived for equality and freedom; I was a tiny water particle who had joined a huge ocean which I had never even imagined in my dreams.

The days of my childhood in which I sought to break stereotypical and backward views, I had managed to keep a small candle of hope lit; now however, these women have given me a torch to light the dark nights for the women of my homeland.

A torch ablaze with hope and humanity.

[1] Ali Mo’ezzi is a resistant political prisoner, presently held in the Greater Tehran’s Penitentiary despite completion of his sentence two years ago. He is denied medical treatment despite suffering from cancer and new charges have been fabricated against him to keep him in jail. The conditions in the Greater Tehran Penitentiary is substandard and inhuman, and inmates are forced to do forced labor.