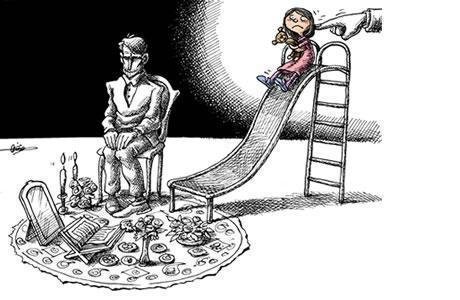 Amir Taghizadeh, cultural and youth affairs deputy in the General Department of Youths and Sports in East Azerbaijan (NW Iran), said, “Parental coercion is the reason for marriage of girl children between 10 and 15 years of age.”

The marriage age for girls in Zainub village is under 10.

Javidnia, the headman of Zeinub village, located 50 km from Tabriz (the capital of East Azerbaijan), says: “Here, girls’ marriages are official. For example, the girl gets engaged at the age of 10. A religious contract (Seigheh) is written (to sanction contacts between the couple), then when the girl reaches legal age, the same contract is registered. Some girls stay engaged for three years and some go to their new home after they are engaged.” (The state-run ISNA news agency- May 24, 2018)

Iran: Zeinab Taheri has been summoned for interrogation