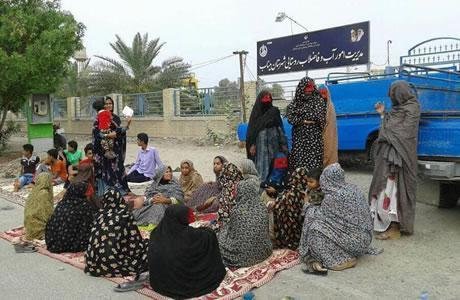 Iran: Women partake in protests in Tehran, south and east of Iran

Women participated in two protests in Tehran and two others in Tabas, in northeastern Iran, and Minab, in the south.

On Sunday, May 27, 2018, several hundred women and men working for the Agricultural insurance fund of various provinces held a protest gathering outside the mullahs’ parliament in Tehran to demand determination of their five-year job status.

On the same day, residents of Khoshkabad village in Minab, southern Iran, held a gathering outside the Rural Water and Sewage Company of Minab in the wake of eight days of drinking water cut-off. They demanded that their problem be resolved.

On Saturday, May 26, 2018, students of the School of Art and Architecture of Tehran’s Azad Vahed University staged a protest against transfer of the university’s campus to Sohank, a distant location.

On the same day, 20 contract workers of the municipality of Tabas staged a protest along with their wives and families outside the municipality building. They had been laid off on May 21, after the municipality bought a sweeping vehicle. The workers have been 10 to 15 years of job experience. They have not received four months of their salaries and the New Year’s bonus and one year of overtime pay.