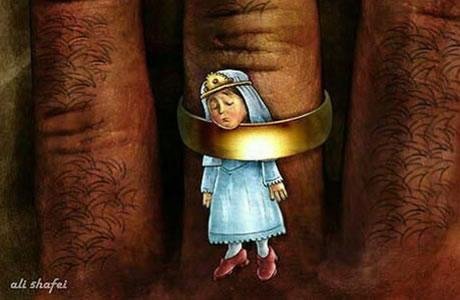 A woman member of the mullahs’ parliament admitted that there are 24,000 young widows under 18 years of age in Iran.

Citing remarks by Massoumeh Agha-Alishahi the state-run media wrote on Monday, May 28, 2018, “The harms caused by early marriage of girl children are so much that now Agha-Alishahi has announced that the existence of 24,000 child widows under 18 years of age.

It is not clear what the fate of these many children is going to be, those who have lost their childhood and have no perspective for a bright future.”

Massoumeh Agha-Alishahi also warned against the increasing trend of this phenomenon and added, “Unfortunately, rural girls have to drop out of school due to an absence of high schools. Then their parents force them to get married after finishing the elementary school. Poverty also does have an impact on child marriages. There are families who force girls as young as 9 or 10 years old to get married with old men just to obtain some money to provide for the rest of the family’s needs.” (The state-run ROKNA news agency – May 28, 2018)