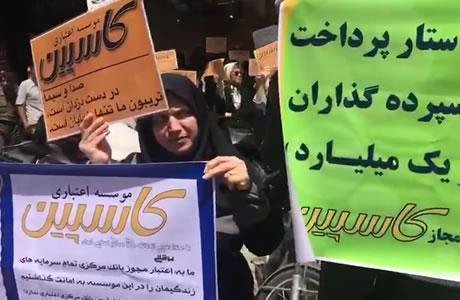 Women and men plundered by the fraudulent Caspian Credit Institute held protests in the Iranian capital, Tehran, and Mashhad, the second largest city of Iran, on Monday, May 28, 2018. Women were particularly active in these protests.

The protest in Mashhad took place outside Caspian’s Sarparasti Branch and in Tehran outside the Sa’adat Branch.

Protesters were angry that their savings and deposits have been swindled by this institute with the support of the Central Bank. They demanded reimbursement of their “life savings.” They also chanted slogans against the state radio and television which do not report on their protests.

Women have participated in at least 40 protests by plundered people this April and May.