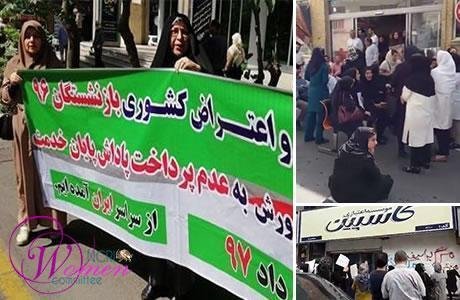 Iranian women participated in at least four acts of protest in Tehran, Rasht, Karaj and Mashhad.

On Tuesday, May 29, 2018, a group of retired women and men who worked for the Education Ministry held a protest in Tehran’s Ferdowsi Square, across from the Ministry of Education, protesting the ministry’s failure to pay their pensions including their final service rewards.

On the same day, another group of women and men plundered by the Caspian Credit Institute took part in a protest in Rasht, northern Iran. They wrote slogans against the Central Bank’s president on the entrance of the branch.

Physicians and nurses of Khomeini Hospital in Karaj, west of Tehran, went on strike to protest non-payment of their salaries and shut down the hospital.

On Monday, May 28, 2018, young women and men studying at Khayyam University of Mashhad held a sit-in protest outside the president’s office. They protested meddling of the paramilitary Bassij in the university’s affairs and asked the president to respond. The university’s president, however, left the school and did not answer the students’ demands.