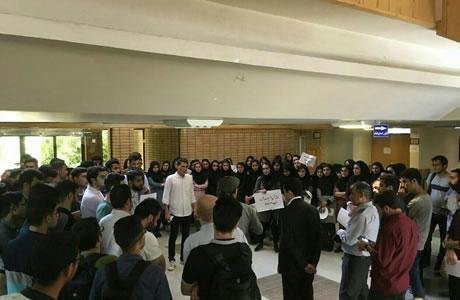 Iranian women participated in protests in Shiraz (southern Iran), Boukan (western Iran), and Mashhad (in the northeast) on May 29 and 30, 2018.

Wednesday, May 30, 2018, residents of Masjid Yas district in Boukan, Iranian Kurdistan, marched to the Governor’s Office to protest water and gas cut-off. A good number of women living in this district actively participated in this march.

On the same day, a group of women and men plundered by Afzal-e Tous Institute in Mashhad, capital of Razavi Khorassan Province in northeastern Iran, held a protest outside the Ayandeh Bank in this city.

On Tuesday, May 29, 2018, young women and men studying at the Industrial University of Shiraz staged a gathering and protested the translocation of the university’s campus due to lack of budget to a new location with half-built buildings and insufficient commodities.