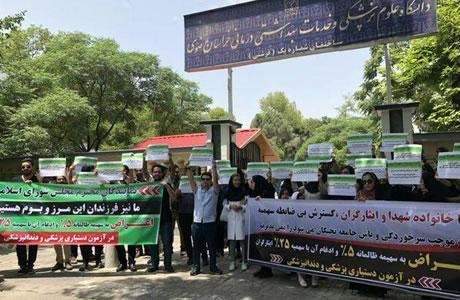 Participants in the college entrance exams for assistant physicians and dentists, including a large number of young women, held their second day of protests in Tehran, Mashhad, Shiraz, Isfahan and Yazd against allocation of admission quotas to the Revolutionary Guard Corps (IRGC) and its affiliate paramilitary Bassij.

Various groups of women and men participating in the college entrance exam for assistant physicians and dentists gathered outside the School of Medical Sciences in their cities on June 3 and 4, 2018, and demanded cancellation of the quotas allocated to government agents.

Only 35 per cent of the admission for assistant physicians and dentists is allocated to ordinary citizens and the rest has been allocated to the IRGC and Bassij.

One of the participants in these gatherings said, “The families of the revolutionary guards killed or maimed in the war have already been allocated over 25 per cent of the admission and if their quota is not filled, the rest would go to other applicants. Now, the parliament has added another 5 per cent to this quota to cover revolutionary guards who have served six months in the fronts or those who have suffered less than 25 per cent disability, thus increasing the 25 per cent quota to 30. In this way, 30 per cent of the seats for the admission test has been denied to the rest of the society and this is an obvious injustice to students.”