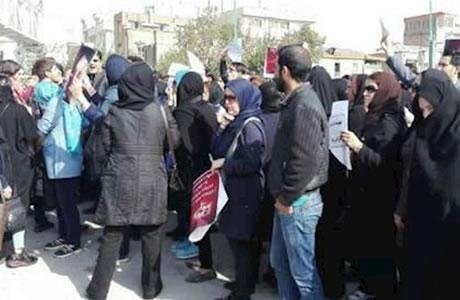 Iranian women participated in at least three protests in recent days in the cities of Karaj, Rasht and Tehran.

Women plundered by the Padideh Shandiz Institute participated in a protest outside the mullahs’ parliament in Tehran on Sunday, June 10, 2018.

Women plundered by the fraudulent Caspian Institute in Rasht (northern Iran) held a protest on Saturday, June 9, 2018, outside the Golsar branch and pelted stones at the institute’s entrance to show their protest.

Plundered men and women have been holding protests for more than one year, demanding reimbursement of their properties, but have not received any response from government officials, so far.

The staff of Khomeini Hospital in Karaj, men and women, also participated in a protest on Sunday, June 10, 2018.

Iranian women participated in at least 150 protests during the months of April and May.