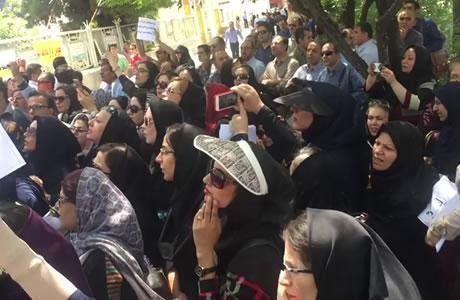 Women’s participation in protests in Shiraz, Borazjan was remarkable

Women’s participation in protests in Shiraz and Borazjan was described as remarkable. On Monday, June 11, 2018, family doctors in Shiraz and the people of Borazjan staged angry protests against non-payment of their salaries for months and shortage of water, respectively.

The ancient city of Shiraz is one of Iran’s major capitals and the capital of Fars Province, in southern Iran. Family doctors working in Fars Province gathered on Monday outside the University of Medical Sciences in Shiraz, protesting non-payment of months of their salaries. Women’s participation in protests by family doctors in Shiraz was active and angry.

Borazjan is the center of Dashtestan county, and second largest city in the Province of Bushehr lying along the Persian Gulf coast. Low water pressure and cut-offs have been prevelant in many parts of Dashtestan County over the past month. The Abfay (water) Company of Dashtestan has not been consistently informing the public on the periods of water cut-off so that they could keep reserves.

The people of Borazjan are dissatisfied with the situation of water in their city. In some central parts of the city, they have water for only a few hours during the day and in some neighborhoods, water cut-offs last several days.

Today, the people of Dashtestan have to spend the long, hot days of summer, sometimes above 50 degrees Celsius, with no drinking water during the fasting month of Ramadan. In some villages in this county, the situation is no better and villagers have resorted to use of well water which could lead to various diseases.

Women’s participations in protests of Borazjan against lack of water in hot summer days was active and loud.

In Kazerun, another major city of Fars Province, tens of thousands of people have been taking to the streets for consecutive days in recent months to protest the unlawful division of their city. Women’s participation in protests in Kazerun have been extensive and very active. The people of Shiraz and Borazjan also joined the people of Kazerun in their protests in act of support and solidarity.

According to the date compiled by the Women’s Committee of the National Council of Resistance of Iran, women actively participated in at least 150 acts of protest and demonstrations in the months of April and May.