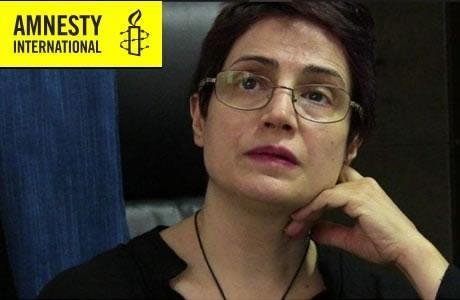 Amnesty International announced, “The arrest of Nasrin Sotoudeh, a prominent Iranian human rights lawyer, is an outrageous attack on a brave and prolific human rights defender.”

According to Mrs. Sotoudeh’s husband, she has been apprehended to serve a five-year prison sentence. Mr. Khandan told the media that he and his wife had not been informed of such a decree.

Philip Luther, Research and Advocacy Director for the Middle East and North Africa at ‎Amnesty International, reiterated, “Nasrin Sotoudeh has dedicated her life to fighting for human rights in Iran. She has won international awards but has also paid a high price for her courage, spending three years in jail. Her arrest today is the latest example of the Iranian authorities’ vindictive attempts to stop her from carrying out her important work as a lawyer.”

“We call on the Iranian authorities to release Nasrin Sotoudeh immediately and unconditionally. Any action short of this must be unreservedly condemned by the international community,” Amnesty International said in its statement.

Amnesty International also wrote, “In recent weeks, Nasrin Sotoudeh has spoken out against the application of a Note to Article 48 of Iran’s 2015 Code of Criminal Procedure. The Note to Article 48 denies individuals facing some offences, including those related to national security, the right to access an independent lawyer of their own choosing during the investigation of their charges. Instead, individuals can only select from a roster of pre-approved lawyers chosen by the Head of the Judiciary. The Head of the Judiciary issued a list with only 20 people pre-approved for Tehran province.”

“Permitting only lawyers who are pre-approved to defend individuals accused of ‘security’ offences – who often include human rights defenders – completely undermines the right of detainees to a lawyer of their own choosing,” said Philip Luther.

Amnesty International also pointed out that Nasrin Sotoudeh had undertaken defenses of some of the women who had protested the compulsory veil.