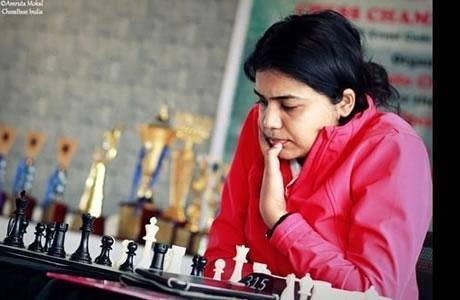 Indian chess master will not go to Iran in protest to the compulsory veil law. Indian chess master, Soumya Swaminathan, will not go to Iran to participate in the Asian tournaments in protest to the compulsory veil. Ms. Soumya Swaminathan, woman grandmaster and member of the national team of India, announced on Wednesday, June 13, 2018, that she would not participate in the Asian Team Chess Championship in Hamedan, Iran.

The Indian chess master wrote in her Facebook post, “I do not wish to be forced to wear a Headscarf or Burkha. I find the Iranian law of compulsory Headscarf to be in direct violation of my basic human rights including my right to freedom of expression, and right to freedom of thought, conscience and religion. It seems that under the present circumstances, the only way for me to protect my rights is not to go to Iran.

“I am very disappointed to see that players’ rights and welfare are given such less importance while allotting and/or organizing official championships. I understand the organisers expecting us to wear our National Team Dress or Formals or Sporting attire for our games during official championships, but surely there is no place for an enforceable religious dress code in sports,” the Indian chess master added.

Swaminathan apologized for not being able to accompany the national team of India by saying, “It is a huge honour for me to represent India everytime I am selected in the National Team and I deeply regret that I will be unable to participate in such an important championship. While we sportspersons are willing to make several adjustments for the sake of our sport, always giving it top priority in our life, some things simply cannot be compromised.” (The state-run ILNA news agency – June 13, 2018)

This is not the first time that women chess players refuse to take part in tournaments in Iran. Irina Krush from the US and Mariya Muzychuk from Ukraine boycotted the chess championship in Iran in 2017. Nazi Paikidze from US did not go to Iran in 2016.

The Women’s Committee of the National Council of Resistance of Iran issued a statement on October 3, 2016, and strongly condemned awarding the Women’s World Chess Championship to Iran under the rule of the mullahs’ religious dictatorship. The NCRI Women’s Committee urged FIDE to cancel its decision.

The Women’s Committee of the National Council of Resistance of Iran urged all female chess players to protest the FIDE decision in step with other top champions who boycotted the games and declared their refusal to take part in the event in Tehran in protest to the mandatory veil and suppression of women in Iran.